Home Greek islands Retrospective: the events that marked 2021 for migrants around the world 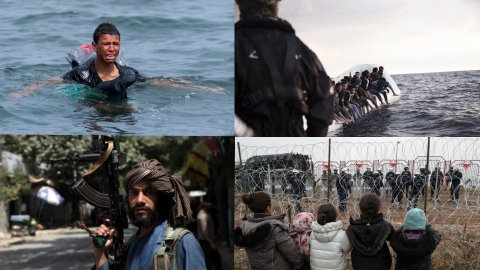 2021 was an even deadlier year in the Channel, the Mediterranean and the Atlantic. This year was also marked by diplomatic conflicts on migration issues: between Morocco and Spain with the arrival of 10,000 migrants in a few days in Ceuta, but also between the European Union (EU) and Belarus with an unprecedented influx of migrants to the eastern part of Europe. Greece has started building fenced camps for asylum seekers. And the Taliban’s return to power in Afghanistan this summer has forced thousands of Afghans to flee in terror.

On August 15, just days after the withdrawal of American troops, the Taliban took control of the Afghan capital.

For several days, thousands of Afghans flocked to Kabul airport in an attempt to flee the country and escape the Taliban. Amid the chaos unfolded scenes of incredible desperation, in which parents handed their children over to foreign soldiers on the outskirts of the airport.

Many countries have taken in Afghan nationals and suspended deportations to Afghanistan. Since August, nearly 3,000 Afghans have been evacuated by France, more than 4,000 by Germany and around 8,000 by the United Kingdom.

Thousands of others, still trapped in the country, fear the reprisals of the Taliban and seek by all means to reach Europe.

EU Commissioner Ylva Johansson announced in December that 15 EU countries had pledged to host a total of 40,000 Afghans. Germany will receive the largest contingent of refugees, with 25,000 people.

2 / Migrants trapped at the border between Poland and Belarus

This summer, thousands of migrants, mainly from the Middle East, crossed or attempted to cross the eastern border of the European Union from Belarus to reach Latvia, Lithuania or Poland.

According to local media, 14 migrants died crossing the border between Poland and Belarus. On the Lithuanian side, one death has been recorded, according to Belarusian authorities.

The EU has accused Minsk of causing this crisis by driving migrants to the border and issuing them visas with the promise of easy passage to Europe. The strategy was in retaliation for EU sanctions after Alexander Lukashenko, the autocratic leader of Belarus, cracked down on the Belarusian opposition movement in 2020.

According to the latest figures from the European Commission in December, just under 8,000 migrants have arrived in the EU via Belarus this year: 4,285 in Lithuania, 3,255 in Poland and 426 in Latvia.

Hundreds more have been waiting for weeks at the Polish-Belarusian border in hopes of reaching European soil.

In response to these migratory surges, Poland and Lithuania have started to build a wall in their regions bordering Belarus. Budapest, for its part, has deployed 1,500 troops to patrol the common border with Lukashenko’s country.

3 / A particularly murderous year in the Channel

Despite the dangers of heavy traffic, strong currents and freezing temperatures, the number of migrants attempting to cross the Channel has risen sharply since the end of 2018. In 2021, the number of crossings was twice as high as the previous one. year.

When a dinghy deflated on November 24 killing at least 27 migrants, it sent shockwaves across Europe and heightened tensions between Paris and London over the migration issue.

In total, at least 30 migrants have died in the Channel since the start of the year and four are still missing. In 2020, six migrants died trying to reach the UK by sea from France, and three others were reported missing.

The increase in attempted sea crossings is due to the lack of transportation options. For example, there are growing risks for migrants to hide in the backs of trucks due to tighter controls due to Brexit and the pandemic, as well as higher prices for this mode of transport.

In mid-May, the Spanish enclave of Ceuta saw some 10,000 migrants disembark from neighboring Morocco in two days. The heightened diplomatic tensions between Madrid and Rabat seem to be at the origin of the explosion of border posts. Relations between the two countries strained at the end of April, when Spain allowed Brahim Ghali, the leader of the Western Sahara independence movement Front Polisario, to seek treatment there.

Read more: Why nearly 6,000 migrants were able to enter the Spanish enclave of Ceuta in a single day

The Spanish government responded by deploying troops to its border with Morocco and expelling thousands of migrants who had jumped over barbed wire fences or swam from Moroccan beaches to nearby beaches in Ceuta.

During this crisis, several photos have gone viral on social networks, such as that of a Spanish rescuer pulling an infant out of the water, the image of a Red Cross volunteer kissing a young migrant, or the photo of a Moroccan miner who arrived crying. on a beach in Ceuta equipped with plastic bottles as floats.

5 / The Atlantic and the Mediterranean are becoming maritime cemeteries

The number of deaths in the Mediterranean and the Atlantic has continued to increase this year.

Since January, at least 1,508 people have died in the central Mediterranean Sea trying to reach European shores, up from 999 last year. Since the International Organization for Migration (IOM) began keeping a register in 2014, nearly 19,000 exiles have lost their lives in these waters.

Read more: Determined to leave: “Either I die at sea, or I manage to reach Europe”

IOM this year counted 937 deaths in the Atlantic Ocean of people trying to reach the Canary Islands. Last year, 874 people died or went missing in the Atlantic.

This is a largely underestimated figure, according to the NGO Caminando Fronteras, which monitors migratory flows in the region. For the first six months of the year, 1,851 deaths were recorded by these humanitarians. Data for the second half of the year will not be available until early next year. “It has been a horrible year,” said the president of the Spanish association, Helena Maleno, when the report was released in early July.

The number of arrivals to the Canary Islands, meanwhile, remained stable in 2021: 21,656 migrants landed in the Spanish archipelago this year, against 19,566 last year.

In 2021, Greece started building fences around several centers for asylum seekers. The first to be closed was the Ritsona camp north of Athens in June. On the Aegean islands, Samos opened its closed center in September, followed by Kos and Leros the following month.

The Greek government plans to open two more secure camps on the islands of Lesvos and Chios. This project is co-financed by the EU, which has invested 276 million euros in the construction of these new facilities.

This confinement strategy has been denounced by NGOs, which warn about the psychological and psychological consequences for asylum seekers. Compared to prisons, these centers are generally far from city centers. An isolation that further marginalizes migrants and refugees, according to humanitarians.