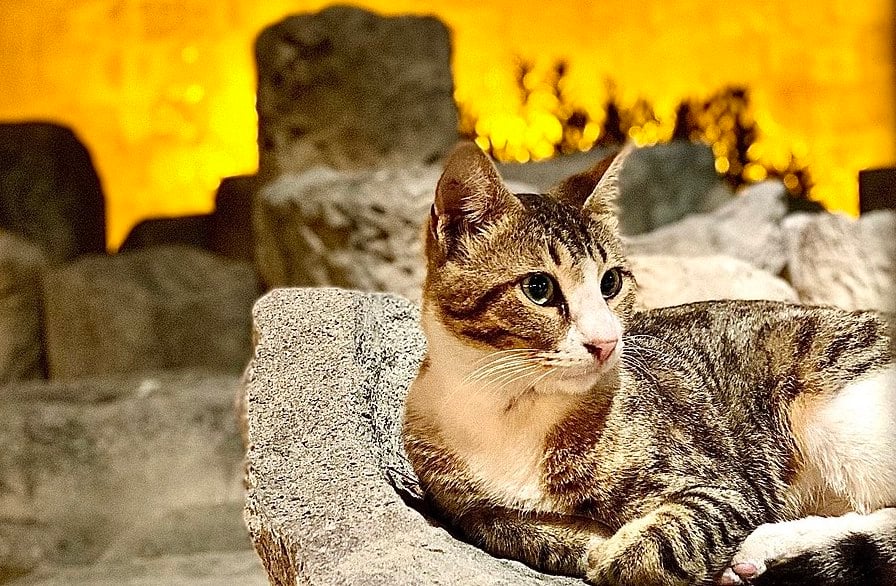 Anyone who has visited Greece or Cyprus knows that these two beautiful countries are home to many cats. Yet some people may be unaware that there are two distinct cat breeds, the Aegean cat and the Cypriot cat, which originated in Greece and Cyprus.

The Greek Islands are particularly known for their adorable four-legged residents. The cats can be seen all over the Greek islands, but are most often seen lounging around the fishing boats in the local port, hoping to secure a good seafood meal.

Most visitors to the Greek Islands are shocked when they find out how kind and friendly the majority of cats are. This is because they are most likely Aegean cats, the only cat breed that originated in Greece and the Greek Islands.

Aegean cats are known to be playful, vocal, friendly, and very affectionate. They are particularly comfortable around the water and love to go fishing.

In terms of appearance, they are always two-tone, or rarely tricolor, and one of their colors is almost always white. The most common color combinations are white and black, white and ginger, and white and tabby.

Aegean cats are best known for their beautiful, piercing eyes. Their large eyes are almond shaped, and often a striking shade of green, yellow, or blue.

Considered to be the descendants of the ancient cats that inhabited the Greek Islands throughout Antiquity, Aegean cats reproduced naturally, without human intervention, for thousands of years.

It is believed to be one of the oldest domesticated breeds in the world.

This natural reproductive process means that these cats are extremely resistant to genetic diseases that are more commonly found in cat breeds created through human intervention.

Although they are kept as pets, many Aegean cats are wild. Whether they have a home or not, felines of this breed are highly regarded in Greece.

Aegean cats have medium sized paws that are well suited to grabbing fish swimming along the sea, and their fur can be short but full in summer and a bit longer and thicker in winter.

Although common in Greece, especially on the islands, Aegean cats are a particularly rare breed outside the country.

Despite being a well-documented breed with a long history, the Aegean cat is yet to be recognized by the Cat Fanciers Association.

This means that, if you are enchanted with the Aegean cat, you will have to visit Greece and adopt one!

Cats from Cyprus, the breed brought by Saint Helena

Cyprus cats, also known as St. Helena cats, are a breed of domesticated felines that can be found on the island nation of Cyprus.

The breed has an illustrious history – according to historical sources, Saint Helena, the mother of Roman Emperor Constantine the Great, herself brought the ancestors of the breed to the island.

It is said that Saint Helena filled her ship with cats from Egypt – although some sources say from Palestine – and took them with her to Cyprus to help tackle the snake problem in the 4th century.

The cats were brought to the Monastery of St. Nicholas, where the population of poisonous snakes was extremely large and threatening. According to legend, cats were called to chase snakes on the grounds of the monastery by a bell that rang every day.

The monastery’s cat population, which is now a convent, is still vibrant. The Greek poet Georgos Seferis wrote a poem about felines there, entitled “The cats of Saint Nicholas”.

There is actually archaeological evidence of cats living alongside humans in Cyprus in ancient times, although they are probably not the ancestors of the Cypriot cat breed.

Excavations at a Neolithic site called Shillourokampos in Cyprus have shown that the ancients genuinely cared about their feline companions and even carefully dug a grave for their pet cat.

The Cypriot breed is linked to other feline groups in Egypt and Palestine, so the story of Saint Helena likely has some truth to it.

The Cyprus cat has a lot in common with the Aegean cat breed from Greece.

Just like the Aegean cat, Cypriot cats breed naturally, so they are less prone to genetic diseases.

Cypriot cats, unlike most Aegean cats, tend to be extremely energetic and athletic. They have a thick coat, which can be short or mid-length.

They are extremely playful and social, and love to be around people. They are also great hunters. Cypriot cats are typically tabby with a mixture of white, but can be any color ranging from ginger to black.

Like Aegean cats, Cypriot cats are common in their home country but very rare in the rest of the world.

Currently, organizations of breeders and cat enthusiasts are starting to develop qualifications for the breed so that it is recognized internationally.

He is already recognized by the World Cat Federation as “Aphrodite’s Giant”.