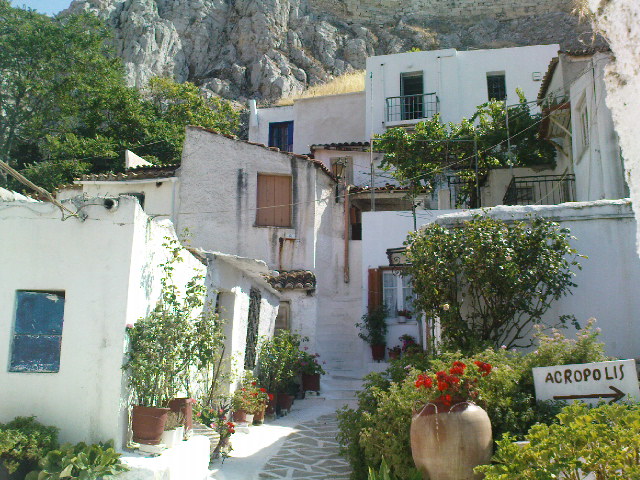 The quaint little neighborhood of Anafiotika nestled above the Plaka, just below the Acropolis, is often overlooked by visitors to Athens – and even some Athenians.

With spots of freshness and calm, Anafiotika is a refuge for around 60 residents who want slow life.

It was built in the 19th century by workers from the small island of Anafi in the Cyclades, hence its name. In 1841, King Otto I encouraged workers to come and help transform the new capital of independent Greece into a modern metropolis and renovate its palace.

Carpenters and masons from the Cycladic island of Anafi came, along with other workers from the Cyclades. They took over the rocky terrain just below the northern slope of the Acropolis, hastily erecting houses, taking advantage of an Ottoman law that decreed that if you could put up a structure between sunset and sunrise. , the property became yours.

The first two inhabitants were G. Damigos, carpenter and M. Sigalas, construction workers. Soon workers from other Cycladic islands also began to arrive there, to work as carpenters or even stone and marble workers, in a new period of reconstruction of buildings in Athens, but also in the following era after the end of King Otto’s reign.

In 1922, immigrants from Minor East also settled here, changing the population that until then had been only Cycladic islands.

In 1950 part of this neighborhood was destroyed for archaeological research and in 1970 the state began buying the houses.

Today, Anafiotika retains the charm of the simple, whitewashed buildings of Anafi Island with an irresistible allure of bougainvillea blossoms, clay pots, and stray cats sitting in the sun.

There are only about 45 houses left, while the small streets from Stratonos to the Acropolis rock are still unnamed and the houses are called “Anafiotika 1”, “Anafiotika 2” etc.

The neighborhood has small cubic houses and narrow streets that often end with ladders or even dead ends on the terraces, places to sit and enjoy the night view of the city.

As one travel site puts it: “In this oasis of tranquility, nestled under the walls of the Acropolis, the intensity of Athens seems miles away.

In Anafiotika is the Metochi of Panagios Taphos (the Monastery of the Holy Sepulcher) which belongs to the Brotherhood of the Holy Sepulcher in Jerusalem. It is a characteristic church of the Ottoman period which was built at the beginning of the 17th century and is dedicated to the Agioi Anargyroi. The church plays a prominent role in Easter celebrations, as this is where the Holy Light first arrives from Jerusalem on the evening of Holy Saturday.

There is also Aghios Nikolaos Ragavas, an 11th century church which is considered one of the most important Byzantine monuments in the city and which offers panoramic views of Athens and Lycabettus Hill.

Lamway expects positive performance in 2021 despite challenges from Covid-19